MetalMiner’s Global Precious Monthly Metals Index (MMI), tracking a basket of precious metals from across the globe, dropped four points (a loss of 4.5%) for the June reading after holding flat for three straight months.

Incidentally, the July 2018 MMI value hit its lowest point since exactly one year ago, when it last clocked in at 84. 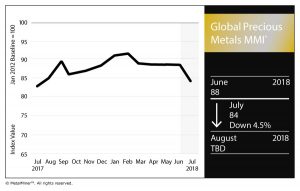 And both platinum and palladium have come off considerably, with the U.S. bar price of the former dipping below $900 per ounce for the first time since February 2016.

What Buyers Should Consider

And Now For Some Mid-Summer Metal Fun

While the product contains trace amounts, at best, of gold’s shiny, less expensive cousin — not to mention that it’s fake — Alexa Silver is still pretty hilarious.

PREVIOUS POST:
Iron Ore Prices Begin to Ease After Period of Oversupply
NEXT POST:
This Morning in Metals: German Authorities Slap €205M in Fines on Steel Companies, Others