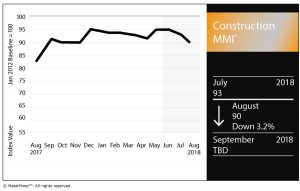 Architecture billings growth continued in June, according to the Architecture Billings Index (ABI), but the pace of growth slowed last month. Nonetheless, June marked the ninth straight month of billings growth.
The June ABI hit 51.3, down from the previous month’s 52.8 (any reading above 50 indicates growth).
By region, however, the billings landscape was a mixed bag.
The South region posted a 57.4, while the Northeast posted modest growth with a reading of 50.2. The Midwest and West lagged behind, however, with readings of 49.8 and 46.9, respectively.
In this month’s survey of industry professionals, many indicated rising expenses was a concern.
MetalMiner’s Annual Outlook provides 2018 buying strategies for carbon steel
“More than nine in 10 firms (92 percent) indicated that they are concerned to some degree about managing the costs of running their firm at the present, with 52 percent reporting that it is a major concern, and 40 percent reporting that it is a minor concern,” the ABI report states. “Small firms tended to be less concerned about firm expenses than large firms, although firms of all sizes were generally concerned.”