In August, the Copper Monthly Metals Index (MMI) fell by four points. The Copper MMI has continued to slide, mainly driven by weaker LME copper prices in July. The current Copper MMI stands at 77 points.
Need buying strategies for steel? Try two free months of MetalMiner’s Outlook
The recent slide in copper prices has been driven by concerns over Chinese growth. Analysts commonly call the base metal “Dr. Copper” because of its strong correlation with the Chinese stock markets. Therefore, Dr. Copper serves as a reflection of the Chinese economy. 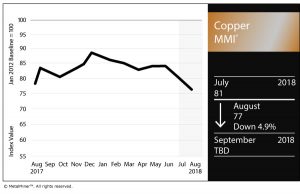 However, fundamental supply issues may add support to copper prices.
The world’s largest copper mine, the Chilean Escondida mine, may get shut down due to a strike. The strike comes as a result of failed negotiations between BHP Billiton and the labor union representing the workers at the mine. The labor union gave the company an ultimatum with a deadline to go on strike. The company could improve the contract offer before Aug. 6.
According to a Reuters report, BHP requested government mediation in the talks with the union, temporarily delaying a potential strike.
Last year, the Escondida mine workers went on a 44-day strike that reduced copper output by 200,000 tons.
Supply disruptions remain a concern elsewhere, as well.
Other mines, such as the Chilean Caserones mine, failed to conclude contract negotiations. Codelco’s Chuquicamata copper mine, the state-owned miner’s second-largest in the country, blocked access to the mine in early August.


The spread seems to have tightened again.

In August, most of the prices comprising the Copper MMI basket decreased.
LME copper fell by 6% this month. Indian copper prices decreased by 5%, while Chinese primary copper prices also fell by 5%.
MetalMiner’s Annual Outlook provides 2018 buying strategies for carbon steel
Prices of U.S. copper producer grades 110 and 122 decreased by 3.76%. Meanwhile, the price of U.S. copper producer grade 102 fell by 3.58%, down to $3.77/pound.