European steel producers have rarely had it so good— that’s not a statement you would expect to hear describing what has been a horribly cyclical industry that has struggled with overcapacity, political interference and significant legacy costs (such as expensive pension funds).

At the same time, the European market has been flooded with cheap imports from Russia, Ukraine, and China, to name a few.

The imposition of U.S. import tariffs drove U.S. hot-rolled coil steel futures to a decade high around $900/metric ton this year, up 35%. Rather than lock out European steelmakers, the resulting price rise has been a boon as European mills have found they can still sell into the U.S. despite the tariffs, as domestic mills rapidly followed the market up. 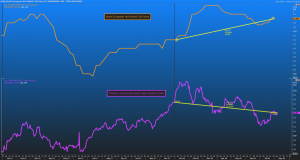 While steel prices in the U.S. held up well over the summer, they are showing signs of weakening now.

According to Reuters, hot-rolled coil prices could be down by $100 per metric ton by the year’s end, as local steel producers ramp up production and higher prices crimp demand.

But in Europe, robust global growth and capacity cuts in China have reduced competition from cheap Chinese imports. 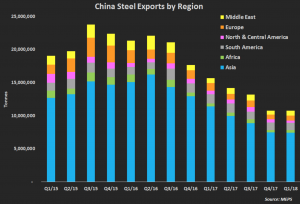 At the same time, importers have been nervous about overordering material since the imposition of the E.U.’s safeguard measures, which were initiated in March but formerly adopted by the Commission only in July. The safeguard measures are intended to impose additional duties if imports exceed what is termed traditional levels. The measures are part of a three-pronged E.U. response to the US decision to impose tariffs on steel and aluminum and are intended to prevent the impact of material being dumped in the E.U. market as a result of it being locked out the U.S.

As a result, European mills have found their order books have remained strong during the seasonally quiet summer months.

Long products in the North European market are booked out for the next eight weeks, according to SPGlobal. Prices are already up €10 per ton from the early summer and further rises are expected in the coming weeks for rebar, as the current measures reduce imports by some 5 million tons per annum, or 3%, according to Reuters.