Following Russia’s military intervention in Ukraine in February 2014 — the Ukrainian crisis, as it became known as — a number of countries imposed sanctions on Russia led by the United States and Europe, but supported by many others like Canada, Australia and Japan.

The impact on Russia’s economy was significant, but by early 2016 many countries, even within the previously united E.U., were calling for sanctions to be lifted (or at least revised).

By that stage, the Russian economy had recovered from the initial shock and, despite the restrictions, was doing rather well.

But this time last year, it all began to go downhill (again, this despite a very pro-Putin president being in the White House).

Initiated by President Barack Obama, Congress passed the Countering America’s Adversaries Through Sanctions Act, which imposed new sanctions on Russia for interference in the 2016 elections and its involvement in Ukraine and Syria.

Then, in March of this year, President Donald Trump imposed financial sanctions under the Act on the 13 Russian government hackers and front organizations that had been indicted by Mueller’s investigation into Russian interference in the 2016 U.S. elections.

This was followed in April by further economic sanctions on seven Russian oligarchs and 12 companies under their control. Among these was Oleg Deripaska, a move that sent such severe shock waves through the aluminum market that the administration hastily backpedaled and gave a stay of imposition until October “to allow the market to adjust.”

Many expected a permanent exception to be made for Rusal or for some fudge of ownership to be manufactured such that Deripaska was no longer deemed to be the controlling entity in holding company En+ or Rusal.

But as the date looms ever closer, questions are being raised about whether this will be how it plays out in practice.

More, rather than fewer, sanctions keep getting added to the list. A recent Economist article reports that in August alone, the U.S. has: slapped penalties on Russian shipping firms accused of trading oil with North Korea; imposed restrictions on the arms trade in connection with the poisoning of ex-Russian spy Sergei Skripal in Salisbury; and began congressional hearings on the two new pieces of legislation designed to punish Russia for its interference in elections.

The Economist report goes on to say the greatest threat to Russia’s economy comes from two proposed bills: the Defending Elections from Threats by Establishing Redlines Act of 2018 (DETER) and the Defending American Security from Kremlin Aggression Act (DASKA).

Sen. Lindsey Graham, one of DASKA’s six bipartisan co-sponsors, is quoted as saying it is the “sanctions bill from Hell.” When details of its contents made their way into the Russian press in early August, the rouble slid to two-year lows and the share prices of Russian state banks began falling, according to the Economist reported. 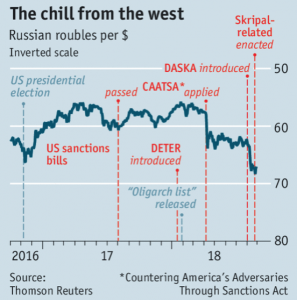 Russia has been taking active steps to mitigate the effects, funneling rising oil revenues into its National Welfare Fund and building up reserves.

However, despite a weaker rouble helping exporters, the economy is suffering.

The uncertainty around sanctions, their impact and the possibility of further measures is having a dire impact on inward investment. Compared with a year earlier, foreign direct investment fell by more than 50% in the first half of 2018, The Economist reported.

Coming as they do on top of the 10% U.S. import tariff on foreign-sourced aluminum, we will see considerable volatility and disruption to the aluminum markets this autumn if sanctions are applied to Deripaska, not to mention other oligarchs on the sanctions list. Shipments out of Russia for any metals – steel, aluminum, and other base and specialty metals – are already being severely delayed as banks scrabble to run compliance checks on the shareholdings and involvement of already sanctioned parties in those producers.

Delays of a month in paying bills normally processed in an hour are now common, which is disrupting supply chains and work flow. For the first time, the market is asking what will be the impact of a total ban on Russian metal supplies (never mind just Rusal’s aluminum).

This uncertainty should be prompting all U.S. metal importers to explore the supply chain of their suppliers in order to understand the potential risks they face and, if necessary, take appropriate steps to safeguard supplies.

For those consumers thinking they only buy domestically and are therefore not affected — think again. You may be buying foreign made metal via a distributor and are potentially still exposed. Even if you are not, domestic prices will rise if there is any significant disruption to foreign supplies.

As we saw with the 25% tariff on steel and 10% on aluminum, tariffs cause domestic producers to move swiftly to capitalize on competitors’ cost increases by raising their own prices.