The Construction Monthly Metals Index (MMI) lost two points this month, falling for a reading of 90. 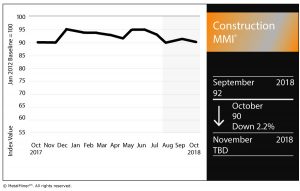 U.S. construction spending in August — the most recently available month of Census Bureau data — hit $1,318.5 billion, up 0.1% from the revised July estimate.

In addition, August spending marked a 6.5% increase from August 2017 spending.

Through the first eight months of the year, spending hit $862 billion, marking a 5.3% increase from the same period in 2017.

Under the umbrella of private construction, spending amounted to a seasonally adjusted annual rate of $1,001.7 billion, or 0.5% below the revised July estimate of $1,006.9 billion.

Meanwhile, in public construction, total spending was $316.7 billion, marking a 2.0% increase from the revised July estimate of $310.5 billion.

The Architecture Billings Index (ABI), produced by the American Institute of Architects (AIA), hit 54.8 in August, its second-highest value in 2018.

An ABI value of 50 indicates no growth, with anything greater than 50 indicating billings growth.

“Billings at US architecture firms saw a healthy jump in August, a positive sign as firms enter what is traditionally a seasonal slowdown,” the AIA’s ABI report for the month states.

Despite strong growth — particularly the Q2 GDP growth of 4.2%, the highest since 2014 — the AIA report offered a cautionary note.

“In spite of these strong economic numbers, the length of this current business expansion has many worried about its resiliency,” the report stated. “Leading economic indicators—interest rates, building permits, and new orders for capital goods—have been less favorable recently.”