The April 2019 Monthly Metals Index (MMI) report is in the books. 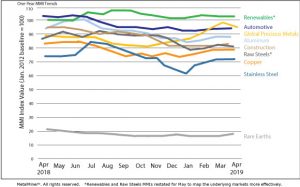 This month was marked by the status quo, as five of 10 MMI subindexes stayed put.

The Aluminum, Automotive, Copper, Renewables and Stainless MMIs all traded flat for the April reading. Raw Steels and Global Precious were down for the month, while Construction, GOES and Rare Earths made gains.

Despite the holding pattern evinced by the MMIs, the past month proved to be a news-packed one for metals markets.
The Brazilian government announced it would file charges against miner Vale SA in connection with a fatal dam collapse at one of its mines in January. Meanwhile, Norwegian aluminum major Norsk Hydro was hit by a cyber attack that forced many of its operations to come to a halt.
In other news, supplies of the steelmaking raw material iron ore were recently disrupted as Tropical Cyclone Veronica battered Western Australia.
On the trade front, U.S. Treasury Secretary Steven Mnuchin this week said the U.S. and China had reached an agreement on the formation of trade enforcement offices, a key issue for the U.S. side.
A few other highlights from this month’s round of reports:

Read about all of the above and much more by downloading the April 2019 MMI Report below:
Want to see an Aluminum Price forecast? Take a free trial!
[s3medialinksafe title=”Download the Report Here” file=”MMIReport_April2019.pdf” expireseconds=”300″ target=”_blank” /]