The Automotive Monthly Metals Index (MMI) dropped two points this month, down to a reading of 91 for May. 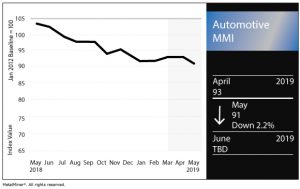 General Motors and Ford Motor Co. have turned to a quarterly sales reporting schedule, moving away from the traditional monthly reporting model. GM made the switch last year, with Ford following suit earlier this year.

Similarly, Fiat Chrysler announced earlier this month that it will start reporting on a quarterly basis beginning Oct. 1. For April, Fiat Chrysler sold 172,900 vehicles in the month compared to 184,149 vehicles in April 2018, a decrease of 6.1%.

In other news for the automaker, Reuters reported Friday that Fiat Chrysler entered into a $307.5 million settlement with about 100,000 U.S. owners of Fiat Chrysler diesel vehicles because of illegal software that caused the vehicles to emit excess emissions.

“As industry sales continue to level off, we are increasing our share of the market through the strength of our car and truck lineups and our disciplined approach to sales,” said Henio Arcangeli Jr., senior vice president of automobile sales at American Honda Motor Co. “The compact SUV segment remains a bright spot for both Honda and Acura brands in 2019, with CR-V the outright retail sales leader in the industry’s largest segment, and the Acura RDX the fastest growing model in the compact luxury SUV segment in 2019 and the top-selling retail model.”

Toyota sales fell 4.4% on a volume basis and 8.6% on a daily selling rate basis. Toyota recently announced Novelis Inc. would supply it with aluminum automotive body sheet for the new 2019 RAV4.

For the industry overall, MarketWatch reported April sales fell 6.1%, down to their lowest level since October 2014.

MetalMiner’s Stuart Burns last month touched on the Tesla–Panasonic relationship after Panasonic announced it would not invest in an expansion of Tesla’s Nevada Gigafactory.

“Output was meant to double next year, but after citing financial reasons the two companies have said they intend to increase production from the existing equipment rather than invest in more capacity,” Burns wrote. “Tesla’s record as a mass manufacturer has come in for considerable criticism over the last 18 months, first with repeated delays in deliveries of the Model 3 and now apparent significant underutilization of the battery plant.”

PREVIOUS POST:
Climate Change Presents Opportunities for Innovation
NEXT POST:
This Morning in Metals: Trump Threatens to Impose Additional $325B in Tariffs on China