I have often thought the moniker of Dr. Copper to be something of a misnomer for the red metal.

Common sense suggests there is much truth in that relationship.

But prices are driven by more than just demand.

Prices should be supported if there is a lack of supply, yet the market seems solely fixated on the demand picture in China.

Copper’s weakening price during the year comes despite the International Copper Study Group reporting that copper production is down 1.4% in the first half and 2019 due to weather-related mine disruption in Chile and the transition of two mines in Indonesia to different ore zones, creating a deficit of some 220,000 tons for the first half of 2019.

All of that is enough, you would think, if indeed that was correct, to significantly support prices.

The copper market, however, is full of contradictions.

In a market apparently facing a deficit, copper stocks have risen markedly. 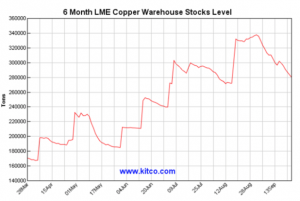 Fitch Solutions’ recent Macro Report predicts the copper market will be in surplus in the 2019-20 period and is forecasting lower prices for next year as mine supply accelerates and consumption remains positive (albeit at a gentler pace of growth than seen historically).

While China is expected to continue to increase output, it will be outstripped in percentage terms, at least by India, which Fitch sees averaging 7.8% annual growth through the next decade as the country’s Make in India policy forces firms to source metal from domestic smelters.

Chinese consumption, however, is predicted to remain weak. Chinese copper consumption growth was downgraded to an estimate of just 0.5% for 2019 compared with expectations of 2.8% growth earlier this year as industrial consumption continues to languish under weak automotive and consumer goods demand, in addition to modest infrastructure investment.

Fitch sees weakening prices through 2021, with a slow but gradual recovery not appearing before 2023 and beyond.

With German PMI numbers last month showing the steepest contraction in the sector since June 2009, demand in Europe’s largest economy is not going to make up for weak Chinese demand.

German output shrank the most since July 2012, according to Trading Economics, and new orders dropped to the greatest extent since April 2009. The Eurozone as a whole is suggesting contraction is likely on the basis of the PMI numbers; the same is true for Japan.

Only the U.S. and China remain cautiously positive, but with the two countries locked in a trade war that shows little sign of reaching a settlement before next year’s elections, the prospects for copper demand — and, hence, prices — remain weakened.

Maybe Dr. Copper is living up to its name.