Home | Commodities | Oil demand is weakening — and with it, the oil price
Market Analysis

Oil demand is weakening — and with it, the oil price

Oil producers and the OPEC+ group, in particular, are feeling the impact of the coronavirus (Covid-19), much like the metals sector.

OPEC has been struggling to keep the market in balance for the last few years. Back in December, its meeting in Vienna led to an agreement to cut production by an additional 500,000 barrels per day, bringing the total production cut to 1.7 million barrels per day in an effort to support prices.

Initially, the move worked, as prices rose through December.

But then, in early January, they took a nosedive, as this graph from OilPrices.com illustrates: 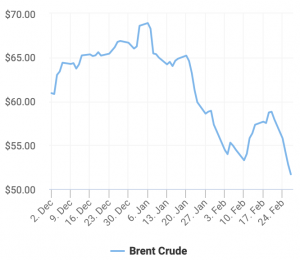 Predictions of oil demand growth have been trimmed, with one in the Financial Times this week suggesting zero growth for 2020. To be fair, that prediction is an outlier, but the hit to demand from China has, at least for the first quarter, proved severe.

The Financial Times is reporting a 25% drop from normal during February. While some regions are slowly returning to normal, bottlenecks will continue to hold back a wider recovery.

Companies in China’s Hubei province, which was the epicenter of the coronavirus outbreak, have been ordered to remain closed for an additional two weeks to March 11. Not surprisingly, fuel demand in Hubei has dropped 80% this month, while Chinese aggregate gasoline, diesel and jet fuel demand dropped 36% so far for Q1 2020, OilPrice.com reports.

With some producers, like Nigeria, dropping prices to shift cargoes previously intended for China to alternative, typically European, markets, Brent crude prices have little to support them and the consensus is for further weakness.

The oil market is expecting Russia and Saudi Arabia will announce an additional 600,000 b/d reduction in output next week when they meet. But with actual production undershooting previous limits, it is widely expected any announced reductions will have little actual impact on oversupply.

In the medium term, weaker prices will inhibit continued production from higher-cost suppliers and dissuade further drilling among some U.S. shale producers. However, with so much of the cost as upfront investment, it takes a considerable amount of time before low prices seriously impact output.

Only demand can come to the oil price’s rescue.

With the coronavirus now spreading among developed markets outside of China some, slowing demand in Japan, Europe and even the U.S. seems probable, at least in the short term.