The Raw Steels Monthly Metals Index (MMI) increased by 4.3% for this month’s value. 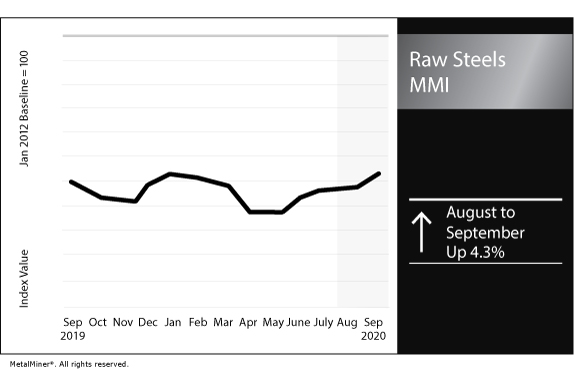 HRC prices increased by over 5.4% throughout August, closing at $486/st. During the first two weeks of September, the price rallied up to $521/st.

The recovery of the U.S. auto industry might be driving the steel price increases.

U.S. auto production continued to improve. Producers such as General Motors, Ford and Fiat Chrysler ramped up their assembly plants.

However, supply has not quite caught up with demand. As such, U.S. auto inventory continues to tighten.

By the end of June, vehicle inventory fell to 2.6 million, or 33% fewer units year over year. Pundits suggest U.S. auto sales will reach an annualized 13.5 million unit rate for 2020, with stronger demand coming in 2021.

The aforementioned factors have not only supported the U.S. HRC price; HDG prices also surged.

The U.S. HDG price only increased by 5.6% throughout August, reaching $736/st, but found further support during the first two weeks of September. By the end of the second week of September, HDG broke resistance to $788/st.

According to Tang Binghua, of Founder CIFCO Futures, imports slowed in August partly due to port congestion from coronavirus-related restrictions. In addition, fewer shipments came from Australia as it closed its financial year.

The Chinese steel market has recovered ahead of the U.S. market as the manufacturing and construction sectors revamped after the lockdowns.

The capacity utilization rate at Chinese blast furnace steel mills reached 86.21% at the end of August, according to Mysteel. The August 2020 rate marked an increase from the rate of 84.96% in August 2019.

The industry’s focus on lowering its emissions is, in part, driving the trend away from BOF production.

However, this trend is also global.

The U.S. expects a 7 mmt increase of EAF capacity in the medium term.

This transformation could put pressure on scrap collection and prices. The sector that generates the most scrap is the automotive, which was particularly affected by the coronavirus lockdowns.

Even though the effect might not be felt in the short term, it is a trend worth watching.

Upcoming negotiation on your steel buy? Make sure you know how your service centers will negotiate with you.