The Rare Earths Monthly Metals Index (MMI) rose by 10.6% for this month’s reading. 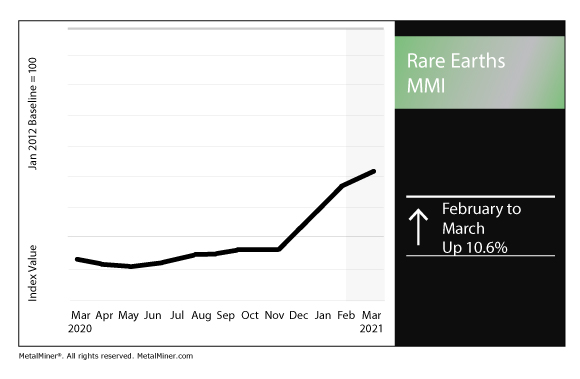 “This half year demonstrated our ability to achieve strong results across all key financial metrics, while running production at 75% of Lynas NEXT rates,” Lynas CEO Amanda Lacaze said. “Despite ongoing uncertainty in the global economy and logistics/supply chain systems due to the effects of the pandemic, Rare Earths market settings were favourable and pricing for Rare Earths materials improved. We demonstrated our ability to capitalise on this upside during the period, with cost of sales maintained at $150.8m while achieving an increase in sales revenue to A$202.5 million.”

“Progress on Lynas 2025 projects continued,” the financial report stated. “A number of project milestones were achieved and critical path items secured for the Kalgoorlie facility during the period. The USA projects team continued to progress the Phase 1 planning and design work for a U.S. based Heavy Rare Earths separation facility. In line with Department of Defense Phase 1 milestones, we expect this Phase 1 work to be completed in the 2021 financial year.”

The order calls for several agency heads to conducts supply chain assessments. China dominates global rare earths processing and mining capacity. The US — namely the Pentagon — long has viewed that dominance and the US’s dependence on foreign sources of rare earths as a national security concern.

“The Secretary of Defense (as the National Defense Stockpile Manager), in consultation with the heads of appropriate agencies, shall submit a report identifying risks in the supply chain for critical minerals and other identified strategic materials, including rare earth elements (as determined by the Secretary of Defense), and policy recommendations to address these risks,” the executive order stated. “The report shall also describe and update work done pursuant to Executive Order 13953 of September 30, 2020 (Addressing the Threat to the Domestic Supply Chain From Reliance on Critical Minerals From Foreign Adversaries and Supporting the Domestic Mining and Processing Industries).”

Despite their name, rare earths are not particularly rare. In fact, as Reuters reported late last month, abundance of elements like cerium and lanthanum has weighed on prices.

On the other hand, prices of neodymium-dysprosium have skyrocketed. Neodymium-praseodymium, used in rare earths magnets, surged by over 20% in the last month alone.

Xiao Yaqing, minister of China’s Ministry of Industry and Information Technology, lamented some lower sale prices. The minister emphasized that government should have a role in “maintaining market order.”