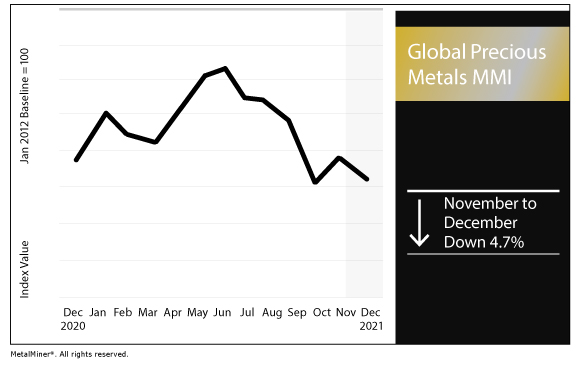 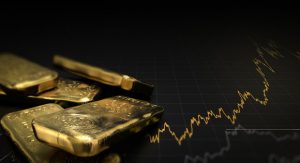 As MetalMiner Insights subscribers may have noted — the Insights platform now offers a suite of precious metals price points — the U.S. gold bullion price surged in the middle of the month before falling back.

After opening the month at $1,784 per ounce, the U.S. gold bullion price surged to $1,867 per ounce by mid-month. However, the price backtracked down to $1,785 per ounce as of the start of December.

Meanwhile, the U.S. dollar, which historically correlates inversely with gold, picked up momentum in November. After falling to just over 93 to close October, the U.S. dollar rose as a high as 96.88 as of Thanksgiving. Since then, the dollar fell closer to 96 before trading sideways.

Earlier this month, the U.S. government reported the Consumer Price Index for the last 12 months increased by 6.8%. Inflation is at its highest level in nearly 40 years.

According to the Bureau of Labor Statistics, the 12-month increase marked the largest jump since June 1982.

As those in the hunt for a new or used car over the last year know, automotive prices have skyrocketed. The new car index is up 11.1% over the last year. Meanwhile, the index for used cars and trucks surged by 31.4%. As noted in the Automotive MMI, automakers continue to struggle with supply shortages and low inventory.

“In light of the substantial further progress the economy has made toward the Committee’s goals since last December, the Committee decided to begin reducing the monthly pace of its net asset purchases by $10 billion for Treasury securities and $5 billion for agency mortgage-backed securities,” the Fed said last month. “Beginning later this month, the Committee will increase its holdings of Treasury securities by at least $70 billion per month and of agency mortgage-backed securities by at least $35 billion per month.”

The Federal Reserve is scheduled to meet Dec. 14-15.

Furthermore, in early November, the Fed announced it will maintain the federal funds rate at 0-0.25%.