The Automotive Monthly Metals Index (MMI) fell one point this month for an August reading of 86. 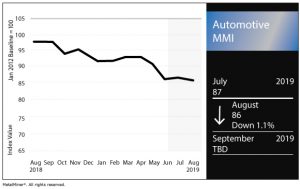 Toyota Motor North America reported July sales were up 0.2% on a volume basis, but down 3.8% on a daily selling rate basis compared with July 2018.

Fiat Chrysler did report its second-quarter financial results, reporting adjusted EBIT in North America of €1.57 billion, up €168 million from Q2 2018. Fiat Chrysler’s North American shipments fell 12% due to dealer stock reductions, according to the automaker.

“We continue to deliver strong performance in North America and LATAM. Robust demand for our new products, along with steps we’ve taken to exert discipline across all of our businesses, have generated the momentum to achieve our full-year 2019 guidance,” CEO Mike Manley said in a prepared statement.

General Motors announced Q2 2019 income of $2.4 billion, up 1.6% on a year-over-year basis. In addition, this week GM announced it would open a $65 million parts processing facility in Burton, Michigan, a suburb of Flint. According to GM, the facility will employ more than 800 hourly and salaried workers.

The seasonally adjusted annualized rate for total sales was forecast to reach 16.7 million units this year, which would come in approximately flat compared with 2017, according to J.D. Power and LMC Automotive.

According to J.D. Power, the rise in prices is being driven by “consumers paying more for recently launched SUVs and more attractive interest rates on new vehicles that help keep monthly payments affordable when purchasing more expensive vehicles.”

The Sales Climate in China

Recently, MetalMiner’s Stuart Burns weighed in on the challenges automakers are facing in China, the world’s largest automotive market.

As Burns explained, some foreign automakers are operating at remarkably low percentages of capacity in China.

“The Financial Times reported Ford’s plants in China operated at only 11% of capacity during the first six months of this year, as the firm’s car sales plunged to 27% of the same period last year,” Burns explained.

“Meanwhile, Peugeot owners PSA’s plant in Chang’an produced just 102 cars — yes, you read that right, 102 cars — in the first half of the year, meaning its capacity utilization was below 1%. The firm’s other joint venture with Dongfeng Auto ran at just 22% of capacity, the article reported, as sales were just 62% of the same H1 period last year.”

On the other hand, Japanese automakers and premium European brands have fared well, Burns noted.

“Japanese carmakers, for example, remain strong,” Burns wrote. “Honda and Toyota are both running extra shifts to maintain better than 100% capacity. Premium European brands are doing well, with Daimler’s Beijing Benz joint venture running close to 90% capacity while BMW Brilliance is running at 96%. If it were just the sale of low-end cars that were suffering, you would expect the Japanese carmakers and Volkswagen to also see a similarly sharp downturn, but they are not.”