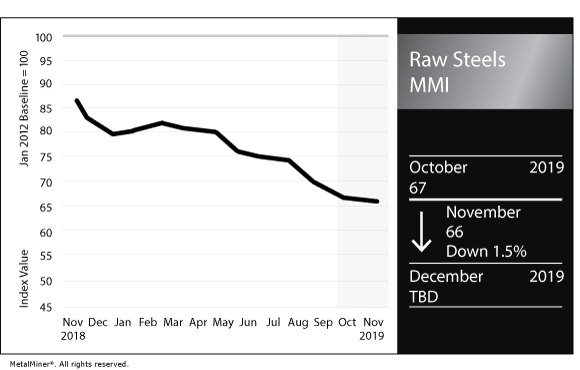 Prices appeared to bottom out back in July (with the exception of plate), especially with price gains seen during August and early September.

Then, weakness set in again throughout September.

Plate prices dropped by another 14% since late August’s high price of $799/st down to $684/st, with prices near those for CRC. While plate prices are closer in line with historical pricing norms, plate prices tend to fall below CRC prices, despite being equal at this time.

While CRC and HDG also dropped below July values to reach new 2019 lows, recent declines were milder (but still significant). CRC and HDG prices dropped 10% and 11%, respectively, over the past couple of months, since reaching higher prices in early September/late August.

U.S. capacity utilization continues to hold above the critical 80% mark, at 80.3%, based on year-to-date production through Nov. 2. Production of 81.6 million tons during that period is up 2.5% year over year, according to statistics from the American Iron and Steel Institute (AISI).

Chinese steel prices looked flat overall but were down slightly of late.

While prices failed to gain any upward momentum, price declines during the past month or two were mild.

Comparing average August prices to early November prices, cumulative declines ranged between 3.3%-5.4% over the period, with HDG and HRC dropping most (at 5.4% and 5.3%, respectively). CRC dropped 4.6% and plate by 3.3%.

With U.S. prices dropping more steeply than Chinese prices during the past few months, the spread between prices on key commodity forms narrowed once more. 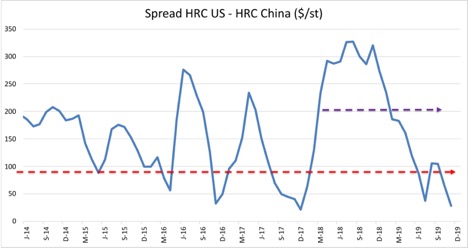 Looking at the above chart showing the spread, valued in U.S. dollars per standard ton, we can see the spread dropped to an absolute value of $29/st — its lowest since December 2017’s value of $22/st.

The red line represents average costs associated with imports, indicating at this time U.S. prices should discourage imports by virtue of being relatively affordable.

The purple line represents the theoretical impact of tariff costs (to be adjusted based on actual tariff rates), which render an additional price buffer for domestic producers (in terms of increasing the price that can be charged before imports look more attractive). 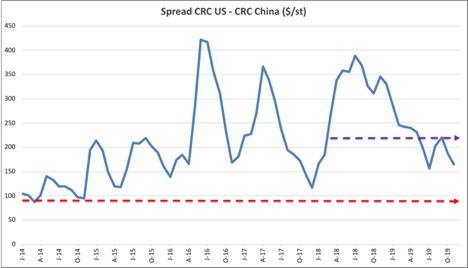 In contrast to HRC, the CRC spread continues to exceed levels expected to discourage imports (pre-tariffs), with the spread remaining above $90/st — our theoretical average per standard ton cost associated with importing.

However, prices dropped below the purple line, indicating the tariff creates an import buffer for CRC at a tariff rate of 25% (based on current price differentials).

On a year-to-date basis through August, imports from Canada declined, while increases occurred from Brazil, Spain and Ukraine.

Based on data from the World Steel Association (WSA), global production increases slowed in September.

Production from January through September of this year reached 1,391.2 million tons, up by 3.9% compared to the same period of last year. However, last month, the year-to-date increase measured 4.6% for the January-August period.

Year-to-date increases in Asia totaled 6.3% over the period, while E.U. production contracted by 2.8%. North American production of 90.6 million tons translated into a small increase of 0.3%.

September crude steel production declined in most major producer countries compared with September 2018, with the exception of China, India and Italy.

If manufacturing gains continue in China, we could see some pricing momentum return. Some signs point in that direction; as of yet, demand has not yet pushed prices higher.