The Rare Earths Monthly Metals Index (MMI) held flat for the month, posting a value of 18 for our January reading. 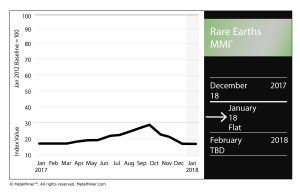 Reflecting the lack of movement in the MMI value, the basket of metals posted modest price fluctuations.

According to the report, Arafura Resources received approval on Friday after a two-year process. The EPA had been considering the environmental impacts of the Nolans rare earths project, the website reported, concluding that those risks at the site could be managed.

According to the report, Arafura estimates the project would create an investment of about $900 million in central Australia.

The global rare earths market is projected to hit a value of $20 billion by 2024, according to a research report by Global Market Insights, Inc.

“Growing demand for magnets in automobiles, and energy generation will majorly contribute to the growth of global rare earth metals market over the forecast period,” the Globe Newswire release states. “The demand for rare earth magnets is majorly increasing by their consumption in electric and hybrid vehicles, and wind turbines. Increasing focus on utilizing clean and renewable energy is giving a substantial pressure on the electricity providers, to generate energy through renewable sources, which in turn will show a positive impact on the growth of this market.”

Not surprisingly given China’s overwhelming dominance of the rare earths markets, prices will continue to fluctuate somewhat wildly based on Chinese supply.

As for individual metals, neodymium will continue on in its place at or near the top of the rare-earths heap.

“By revenue, neodymium had the highest market share in 2016, with a market share of over 30%,” the release states. “It will dominate the global rare earth metals market till the end of projected period. Neodymium market will grow at a CAGR of 8.2% from 2017 to 2024.”