The Renewables Monthly Metals Index (MMI) picked up a point for our January reading, rising from 78 to 79 (a 1.3% jump). 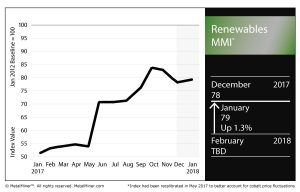 Several of the heavier hitters in this basket of metals posted price increases this past month.

Continuation of Steel Plate Tariffs on the Table

Northwest Indiana, where Merrillville sits, is home to significant domestic steel industry activity, including by ArcelorMittal, which produces steel plate at its Burns Harbor Plate Mill — located in Gary, Indiana — the paper reported.

“As a representative and resident of Northwest Indiana, I am acutely aware of the challenges facing the American steel industry due to the onslaught of illegal steel imports,” the Times quoted Visclosky as saying during testimony at a hearing in Washington, D.C. “The ArcelorMittal facility at Burns Harbor in Northwest Indiana makes cut-to-length carbon-quality steel plate, and every one of those dedicated workers deserve to be able to continue to fairly compete and make the best steel to the best of their ability in our global economy.”

Of course, the issue is one of many metals-related trade issues before U.S. trade bodies (the most headline-grabbing being the Section 232 probes into steel and aluminum imports, for which a ruling is expected this month).

“It is essential for both our national defense and our national economy, and we cannot afford to threaten our production capabilities,” the paper quoted Visnosky as saying.

GOES Gets a Boost

As reported by our Lisa Reisman yesterday, grain-oriented electrical steel (GOES) got a boost this past month.

GOES prices, as Reisman noted, usually don’t move in tandem with other forms of steel — but it didn’t play out that way in December.

Import levels, however, are something to monitor going forward.

“In addition to prices moving in a similar direction, import levels also followed similar patterns, although GOES imports showed a dramatically higher increase whereas finished steel imports grew by 14.5% on an annualized basis according to the American Iron and Steel Institute (AISI),” Reisman added.

While China is often the subject of much discussion regarding a flood of imports into the U.S., when it comes to GOES, Japan is actually the leader in exports to the U.S.

Japan owns about two-thirds of the U.S. GOES import market share, rising significantly despite a drop in overall finished steel sent to the U.S.

The explanation for that disparity?

“Increased domestic efficiency standards have led to the development of higher performance electrical steels (HB), which have taken share away from the more conventional grades produced by the sole U.S. producer,” Reisman wrote. “With no U.S. producer of these grades, the market has become more reliant on exports from Japan.”