The Renewables MMI (Monthly Metals Index), after a significant surge last month, sat at 100 for the second consecutive month. 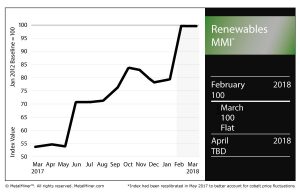 Within this basket of metals, the Japanese steel plate price rose, as did the price of Chinese and American steel plate. U.S. steel plate, in fact, rose 5.5% month over month.

As for the trio of rare and minor metals in this MMI, cobalt cathodes fell 1.1%, while silicon dropped slightly and neodymium made a small gain.

According to a report by the Financial Times, changes to the mining code in the Democratic Republic of Congo will lead to higher costs for consumers of the metal.

According to the report, President Joseph Kabila on Wednesday said he would sign a new order after meeting with representatives from some of the big miners with business in the country, including Glencore, Molybdenum and Ivanhoe Mines.

Cobalt is used in batteries for electric vehicles (EVs), among other things, making it an especially prized material as EVs gain popularity. As such, with a majority of the world’s cobalt being mined in the DRC, political machinations in the country have a significant impact on the metal’s price.

According to the Financial Times, the code could see royalties on cobalt — plus other metals, like copper and gold — rise from 2% to 10%.

The Journal-News reported on a trio of U.S. senators who lobbied Trump to prioritize electrical steel in the Section 232 trade remedy process.

The only remaining maker of electrical steel in the country, AK Steel, was unlikely to benefit from the Section 232 trade remedy proposal, according to Sen. Rob Portman (R-OH).

“We write you today to share our concerns that your proposed section 232 remedy is incomplete when it comes to electrical steel,” Portman and two other senators said in their letter to Trump, according to the Journal-News. “We write on behalf of a constituent company, AK Steel, which is the last domestic producer of grain-oriented electrical steel (GOES). Since the remedy, as currently constructed, does not include electrical cores and core parts, the remedy will not be effective for the domestic electrical steel market.”

In the senators’ letter, they requested the president add a trio of HTS codes to the duty order.