As my colleague Sydney Lazarus reported yesterday, even though the European Union has a temporary exemption from the U.S.’s Section 232 tariffs on steel and aluminum, it is demanding compensation at the World Trade Organization as shown in a filing by that trade body two days ago, according to Reuters.

The EU is arguing that the U.S. tariffs were imposed only to protect U.S. industry, rather than for security measures.

MetalMiner Executive Editor Lisa Reisman took readers through how the U.S. Department of Commerce did its homework on the Section 232 steel investigation, in a top-read post originally published Feb. 23, 2018. Read the full text of Lisa’s article below.

By now most MetalMiner steel producers and steel buying organizations have pored over the Section 232 steel report published by the Department of Commerce. In case you missed it, here is a link to the full report.

At its core, the Section 232 investigations represent the only public policy solution put forward by any major government to address the fundamental crisis involving extensive and pervasive global overcapacity for steel, stainless steel and aluminum.

Before you scream “protectionism!”, read on.

The Department of Commerce stated in its findings, “The Stern School of Business at New York University calculates that U.S. steel industry participants in the last five years experienced negative net income of 17.8 percent. Compounded growth in revenue for the past five years in the steel industry has been a negative 7 percent.” 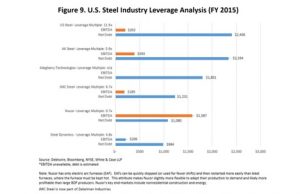 The report goes on to explain that capital-intensive industries cannot stay afloat long term on these types of poor margins (SOEs from China notwithstanding). BOF plants have higher operating costs than EAF plants and many military grades of steel can only be produced by BOF producers. Record-high imports force U.S. steel companies to operate under less-than-profitable capacity utilization rates.

Based on the Department of Commerce’s analysis, only two countries produce steel at that 80% capacity utilization rate – Japan and South Korea.

The report goes on to discuss the ability of the domestic steel industry to support national emergency type requirements under multiple scenarios. The report suggested the U.S. would not have enough back-up capacity to support a scenario similar to World War II, for example.

According to Barry Zekelman, CEO of Zekelman Industries and a large flat rolled steel buyer speaking of the report recommendations, “Each of the recommendations has different benefits and traps. I am a proponent of hard quotas because we know cheating can happen on the duties,” he said.

Zekelman went on to explain that “many of those solutions will give us good relief and allow us to hire more people and provide them with good opportunities. … I’m very positive.”

Most of the commentary on potential retaliatory trade actions looked similar to this article from Morningstar suggesting the DOC has pursued action, “in the guise of protecting US. security” and that this action — the report — “breaches international trade obligations as established under the World Trade Organization.”

We see no guise. The equation is glaringly simple – a weak domestic steel industry will not support our nation’s security, particularly in a national emergency.

We’d also question what exactly the WTO has done to address global overcapacity. We’d argue not much (if anything).

To this point, regardless of whether or not you agree with the findings, should the U.S. accept a social policy crafted in China to over-produce steel to create jobs for its citizens while at the same time – perhaps even more strategically – providing the centrally planned state an expanded ability to produce military-grade product while simultaneously disarming U.S. production capacity?