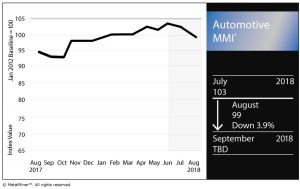 July was a down month for Ford, which saw its U.S. sales drop 3.1%. Ford car sales were down 27.7% year over year, and 15.7% in the year to date.
However, truck sales continue to shine, with sales rising 10.2% in July.
“And when you look at the underlying economy, it remains very healthy, and that would be indicative of what we’re seeing in the truck market, with F-Series posting gains and vans posting very big gains for Ford Motor Company,” Ford Sales Analyst Erich Merkle said.
It was a different story for Fiat Chrysler, which reported a 6% sales increase compared with July 2017. According to a company release, its Jeep brand had its best July ever, with retail sales up 16%.
Honda reported an 8.2% year-over-year drop, but touted its growing truck sales.
“For the first time in our company’s history, the Honda brand is on pace this year to sell more light trucks than passenger cars,” said Henio Arcangeli Jr., senior vice president of the American Honda Automobile Division, in a release. “Honda’s unique flexibility within our U.S. manufacturing operations has played a critical role in our ability to adjust our production mix and capitalize on the market’s shift toward light trucks.”
Toyota reported its July sales were down 6.0% year over year, but noted July marked its best month ever for light-truck sales.
General Motors no longer reports sales on a monthly basis, instead opting earlier this year to report on a quarterly basis.

Late last month, President Donald Trump and European Commission President Jean-Claude Juncker met at the White House, a meeting that yielded an agreement of sorts to pump the brakes on new tariffs.
However, cars were exempted from the agreement between the two leaders.
A U.S. Section 232 investigation into imports of automobiles and automotive imports is still ongoing. The Department of Commerce launched the investigation using the Section 232 statute — also used to impose steel and aluminum tariffs — in late May and a public hearing was held July 19.

Although the Trump administration has yet to impose new tariffs on imported automobiles, General Motors has asked that its Buick Envision SUV, which is made in China, be exempted from any new tariffs, the Detroit Free Press reported.
Most of GM’s sales of the SUV model come from China, according to the report, and the company argues production in the U.S. would thus not be feasible.
Earlier this summer, GM expressed its opposition to the imposition of new automotive tariffs, saying they would lead to job losses and would impact the automaker’s competitiveness in the global marketplace.