The March MMI Report: Six of 10 Subindexes on the Rise 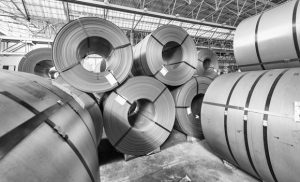 The March 2019 Monthly Metals Index (MMI) report is in the books. 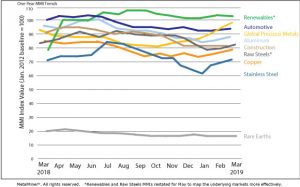 It was another month of upward movement for a majority of the MMI subindexes. After a sluggish close to 2018, six of 10 subindexes moved up for the March MMI, The Aluminum, Automotive, Copper, Global Precious, Raw Steels and Stainless MMIs all posted increases for the month, while the Renewables and GOES MMIs fell and the Construction and Rare Earths MMIs traded flat.

Meanwhile, in trade news, the U.S. continued trade talks with China, with some optimistic reports suggesting a deal could be imminent. However, previous deal attempts have failed in late stages, so it remains to be seen whether this time will prove any different. The negotiations come as the U.S. Census Bureau recently released data showing the U.S. posted a record trade deficit in 2018, including a deficit of $419.2 billion, up from $375.6 billion in 2017.

As for trade news in the U.S.’s neck of the woods, the United States-Mexico-Canada Agreement — which would supersede the North American Free Trade Agreement (NAFTA), approved in 1994 — remains in legislative limbo. The legislatures of the three countries must approve the deal before it can go into effect. The status of the extant Section 232 tariffs on steel and aluminum from Canada and Mexico remains a sticking point.

A few highlights from this month’s MMI series:

Read about all of the above and much more by downloading the March 2019 MMI Report below: