No, we’re not talking about Eddie Murphy and Dan Aykroyd (although we do love that classic film). 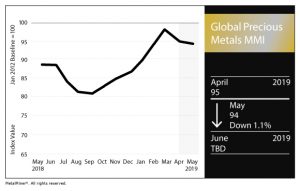 The Global Precious Monthly Metals Index (MMI) has just entered a two-month downtrend, with global trade uncertainties and other economic worries serving as a backdrop. Platinum and palladium are once again taking center stage.

The subindex tracking a basket of gold, silver, platinum and palladium prices from four different geographies decreased one point to 94 for the May reading — a 1.1% drop — driven by drops in U.S. gold, silver and platinum prices.

While both platinum and palladium prices dropped last month, in May only palladium began the month lower, while platinum bumped up a bit. This tangible — yet potentially insignificant — short-term reversal of fortune for those two platinum-group metals (PGMs) stands in stark contrast to the previous trend: a huge divide over the past year and a half or so in the platinum-palladium spread, with the latter metal holding a vast premium to the former, which continues today.

Palladium still holds at nearly $100 per ounce higher than the gold price, which stood at $1,283 per ounce in the U.S. at the beginning of the month — down only a few dollars per ounce over the previous month.

Platinum and Palladium (and Gold and Silver) Perspectives

This one-month price trend reversal looks to align with the longer-term forecast as well, according to some analysts.

“Palladium will cost an average $485 an ounce more than platinum this year – a record breaking premium – but the gap will narrow in 2020 as the rally fizzles out and platinum recovers after an eight year downturn,” a Reuters poll showed, according to this article.

“The poll of 27 analysts and traders conducted this month returned a median forecast for palladium to average $1,350 this year – its highest annual average ever – and $1,275 in 2020,” the article stated. “That prediction is higher than a similar poll three months ago which forecast prices of $1,200 this year and $1,150 in 2020.”

Meanwhile, Goldman Sachs stated in a recent analyst report that “we think that lack of substitution by auto companies will lead palladium to continue to outperform platinum,” according to Kitco News.

The investment bank went on record as saying, “Palladium is also set to benefit more than platinum from tighter environmental restrictions in China,” and “as such we reopen our long palladium-versus-short platinum trade recommendation.”

Goldman is also bullish on gold and bearish on silver.