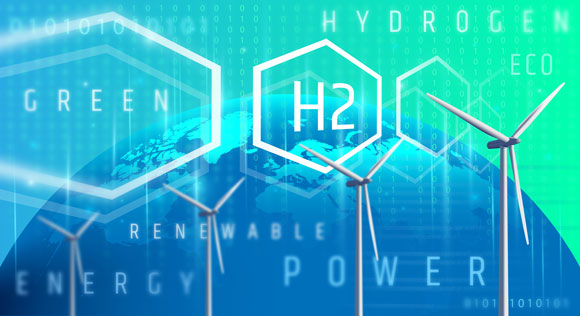 Has the time for the “fuel of the future,” green hydrogen, arrived?

Recently, some of the world’s biggest green hydrogen project developers and partners joined hands to launch the “Green Hydrogen Catapult” initiative that aims to drive down costs to below U.S. $2 per kg to help change energy across carbon intensive industries, including steel.

The Green Hydrogen Catapult initiative will try to scale green hydrogen 50-fold in the next six years. The initiative will leverage the support of the Rocky Mountain Institute, a U.S.-based nonprofit organization.

The race to zero emissions is aiming for the deployment of 25 gigawatts through 2026 of renewables-based hydrogen production.

What is ‘green hydrogen?’

Green hydrogen has been regarded for many years as an alternative fuel to decarbonize emissions-intensive heavy industry and supply chains.

It is produced by using renewable energy  — wind and solar — to power electrolysis that splits water into its constituent parts.

With global warming becoming a serious threat, governments have been contemplating the use of hydrogen to “decarbonize” several industries. Those industries include steel, petroleum, transport, industrial heating and others. In addition, they are looking to its role in energy security.

The idea is to have a serious alternative to fossil fuels.

“Having led the race to deliver photovoltaic energy at well-below US$2 cents per kilowatt-hour, in certain geographies, we believe the collective ingenuity and entrepreneurship of the private sector can deliver green hydrogen at less than US$2 per kilogram within four years,” said Paddy Padmanathan, chief executive of ACWA Power, in a release. “From an industry perspective, we see no technical barriers to achieving this, so it’s time to get on with the virtuous cycle of cost reduction through scale up.”

According to a report by Greentech Media, ACWA Power is already working with U.S. firm Air Products & Chemicals on a U.S. $5 billion green hydrogen plant in Saudi Arabia. Four gigawatts of wind and solar will power the plant, which will produce 650 tons of the gas per day.

Meanwhile, according to the findings in a paper titled “Path To Hydrogen Competitiveness A Cost Perspective” by The Hydrogen Council, scale-up will be the biggest driver of cost reduction, notably in the production and distribution of hydrogen.

This will deliver significant cost reductions, even before any additional impact from technological breakthroughs.

Energy of the future

Studies have forecast that green hydrogen will meet at least 25% of the world’s energy requirements by 2050.

The paper by The Hydrogen Council concluded that hydrogen is “already scaling up” and considerable investments are being made globally. Furthermore, green hydrogen will provide an important low-carbon option across a wide range of sectors.

However, hydrogen’s development still requires suitable financial, infrastructural and policy support to achieve wide deployment and scale-up through commercial projects. In addition, the hydrogen industry can help enable the energy transition to a net-zero world, The Hydrogen Council added.