The Construction Monthly Metals Index (MMI) ticked up 1.0% for this month’s reading, as US construction spending dipped in February. 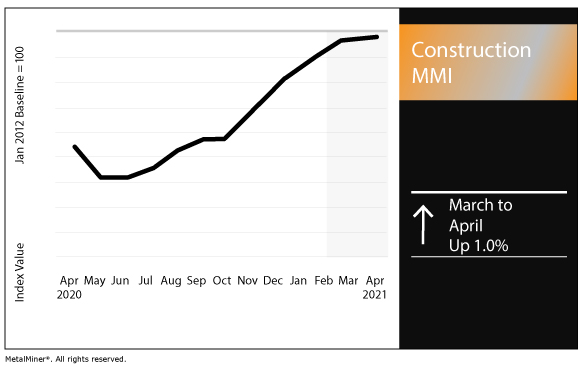 Construction spending in February reached a seasonally adjusted annual rate of $1,516.9 billion, or 0.8% below the revised January estimate of $1,529.0 billion, the Census Bureau reported.

Meanwhile, the February rate marked an increase of 5.3% year over year.

Biden’s jobs plan could have major impact on construction sector

President Joe Biden’s American Jobs Plan — the details of which he unveiled last week — aims to revamp and modernize US infrastructure, from roads and airports to broadband and housing.

On the housing front, the plan aims to invest in production of more affordable housing.

“The President’s plan invests $213 billion to produce, preserve, and retrofit more than two million affordable and sustainable places to live,” the White House said in a release. “It pairs this investment with an innovative new approach to eliminate state and local exclusionary zoning laws, which drive up the cost of construction and keep families from moving to neighborhoods with more opportunities for them and their kids.”

The plan calls for the construction and rehabilitation of 500,000 homes for low- and middle-income homebuyers.

The president’s plan aims to ramp up construction spending targeting the country’s aging infrastructure, from roads to bridges. The plan includes $115 billion to modernize bridges, highways, roads, and main streets.

The Associated General Contractors of America called the infrastructure improvements “much-needed” but panned other aspects of the proposal.

The Associated Builders and Contractors offered a similar take on the plan’s proposals related to labor and corporate taxation.

“While policy details are still emerging and the infrastructure plan will need to go through Congress, it is disappointing to see the Biden administration support the use of divisive government-mandated project labor agreement schemes on taxpayer-funded construction projects,” ABC President and CEO Michael Bellaman said. “Government-mandated PLAs exclude more than 87% of the U.S. construction workforce from rebuilding their communities and benefitting from well-paying middle-class jobs created by taxpayer investments in infrastructure.”

According to the National Association of Realtors, pending home sales fell by 10.6% in February.

The drop marked the second consecutive month of decline for pending home sales.

“The demand for a home purchase is widespread, multiple offers are prevalent, and days-on-market are swift but contracts are not clicking due to record-low inventory,” said Lawrence Yun, NAR’s chief economist.

“Only the upper-end market is experiencing more activity because of reasonable supply,” he continued. “Demand, interestingly, does not yet appear to be impacted by recent modest rises in mortgage rates.”

The US construction sector added 110,000 jobs in March, the Bureau of Labor Statistics reported.

“Employment growth in the industry was widespread in March, with gains of 65,000 in specialty trade contractors, 27,000 in heavy and civil engineering construction, and 18,000 in construction of buildings,” the BLS reported.

However, construction employment is still down by 182,000 jobs from its February 2020 level.

Furthermore, construction unemployment remains “elevated,” according to the Associated General Contractors of America.