The Automotive Monthly Metals Index (MMI) rose by 2.5% for this month’s reading, as Q1 2021 auto sales surged. The MetalMiner Best Practice Library offers a wealth of knowledge and […]

The Automotive Monthly Metals Index (MMI) rose by 7.1% this month, as US auto sales were strong in February. You want more MetalMiner on your terms. Sign up for weekly […]

The Automotive Monthly Metals Index (MMI) ticked up 4.6% for this month’s value, as automotive sales were strong in January. US auto sales On the sales front, Honda reported its […] 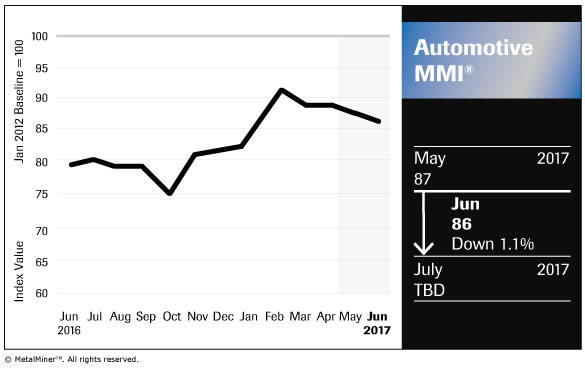 The Automotive MMI, our sub-index of industrial metals and materials used by the automotive sector, dropped by one point for a June reading of 86. The Automotive MMI has not seen an increase since early this year, when the figure accelerated from a January reading of 82 to 92 in February.
Benchmark Your Current Metal Price by Grade, Shape and Alloy: See How it Stacks Up
Overall, consumers seemed to pass on auto purchases in May, continuing the slowdown from January-April. Car and light truck sales — checking in at a total of 1.52 million in May — were down for the third month in a row. Automakers reported a 1% drop in sales from the previous year, according to a Reuters report.
While Ford Motor Company’s sales are down by 3.5% in the calendar year to date compared with the same point in 2016, it had a good May, edging out GM and others, according to data from Autodata Corp.
Ford sold 240,250 vehicles in May, a 2.3% increase from its May 2016 total sales.
GM, meanwhile, sold 237,156 vehicles in May 2017, a 1.4% drop from May 2016.
As for Chinese auto sales, those are down, too, despite a strong first quarter. Reuters reported a 2.2% drop in April sales after a 5% rise in March. The decline was the largest in China since August 2015, according to the report.
So how does that related to the metals side of the story?

US plan to protect sage grouse will limit oil & gas I admit, I love birds and birding probably much more than the next guy, which is why this story […]

The global metal casting industry is expected to reach 105 million metric tons by production over the period 2014-15. The industry has been completely driven by the recovery of end […]

In the first part of this article, downward iron ore price trends took center stage as the #1 potential gamechanger in 2014 as far as metals market disruptions go. With […]